I’ve recently got back into Model Railways, and have constructed various card kits for the buildings. These really needed lighting, and this page describes the process that I used.

An economical solution to both these is to use commercially available “LED Strip”. This consists of groups of 3 surface mounted LED’s, together with a resistor, mounted on a self adhesive strip. I find the “WARM WHITE” ones give the best colours and the non-waterproof variants easier to work with.

They are normally sold in 500mm, 1m or 5m lengths. Ebay is often the cheapest place to get these – A 5m strip (containing 300 white LED’s)  is under £3 delivered – at 1p/LED, this is much cheaper than buying them individually.

This is a 50mm length of the strip:

Unsolder the resistor and cut the strip into sections, each containing a single LED. Remember which side of the LED is positive – on this strip, it’s the side marked with L.

Thin wires can then be directly soldered on to the LED: 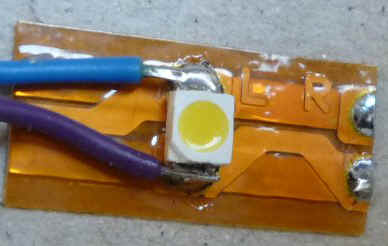 The self adhesive backing is then removed, and the LED stuck on the ceiling of the model:

Power
Each LED has a constant voltage of between 3.0V and 3.1V. A stable supply is best, otherwise the LED’s can flicker. Wire as many LED’s in series until the total is just below the voltage used, then add a resistor to control the current through the LED’s to around 5mA. For those who can’t remember Ohms law:

If the supply isn’t too well regulated, use one of the circuits described on the LED Lighting Solutions page.

Unfortunately, once you light a building, the insides become more visible, and it looks better if at least a floor and some simple ‘furniture’ is added. I use 1/32″ cork sheet for the floor as it’s not too reflective, and small blocks of MDF or batten for the ‘furniture’:

This is the final result of this conversion:

Note that you can just see the shadow of the lights outside the building, and can (just) see the hints of furniture inside.

This is a second model that’s been ‘lit’: 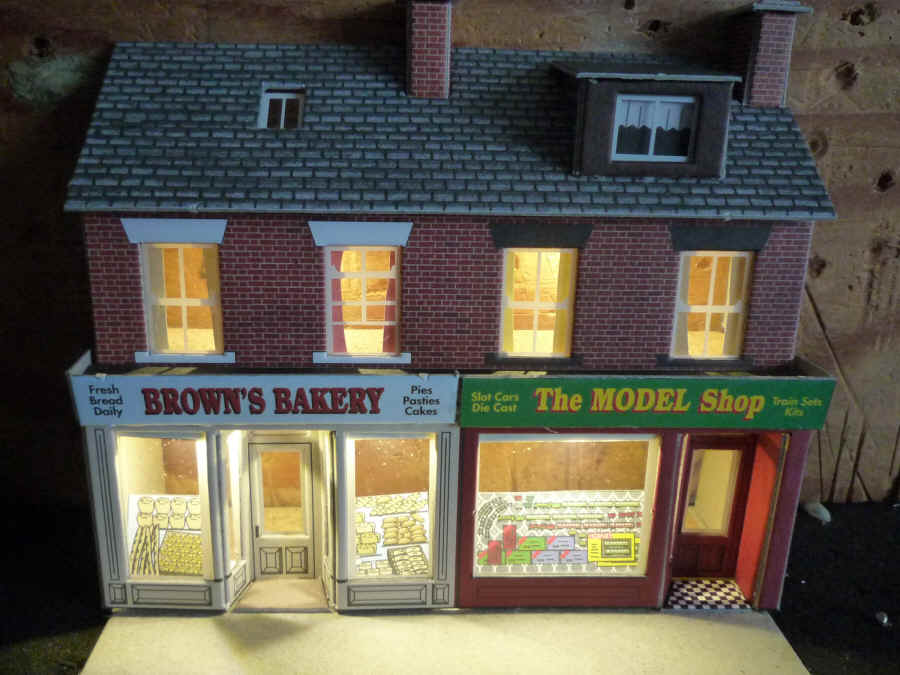 Here, the “shop” LED’s are mounted very near the front so that they illuminate the window displays.