When we go camping, having a source of 12V power available is very useful, and for many years, I’ve used a combination of SLA (Sealed Lead Acid) batteries and a variety of solar panels to charge them.

This charger provides a simple (and reasonably efficient) way to charge a battery from a nominal 12V solar panel, and has the following features:

Most electronic engineers will notice the lack of diodes between the solar panel and the battery. This isn’t a mistake, but an interesting consequence of the particular regulator used. Do not expect a general purpose adjustable regulator to work the same way! Ideally, the capacitor on the input should be non-polarised to allow for the solar panel connection to be reversed for a long time.

I’ve made a number of these, and with a bit of adjustment of the 1M SOT resistor, the output voltage can be set pretty accurately. I’ve not attempted any temperature compensation as the weather in the UK is rarely good enough, given that the batteries sit under my trailer, which stays nice and cool.

The Linear Technology LT1129CT regulators are available from a number of sources. I got mine from Farnell, part number 9560092. All the other components are the sort of thing found in a junk box (well, in my junk box anyway). Construction is non-critical; I just mounted everything on a small piece of veroboard. When used near maximum output, the regulator will need a suitable heatsink – I just used the die-cast box that the charger is mounted in.

When back at home, I like to keep the various batteries charged. I use a small solar panel in a window, the charger above, and this lead:

This reduces the battery voltage to a suitable value for permanent float charging, and allows multiple batteries to be connected to one charger.
My “indoor” panel rarely produces more than 200mA, but it’s more than enough to compensate for the battery losses over time.

I also have a variant of this regulator with the output set to 13.8V for charging mobile phones etc:

This is connected to a “cigar-lighter” socket, and has proved to be very useful for charging not only phones, but with suitable off the shelf 12V adaptors, MP3 players, cameras and, with a suitable charger, AA batteries.

This uses two battery charger circuits and one mobile phone charger circuit all connected in a single waterproof box. As you can see from the photo, I’ve also added a meter and a small flashing LED that shows when the panel is connected. 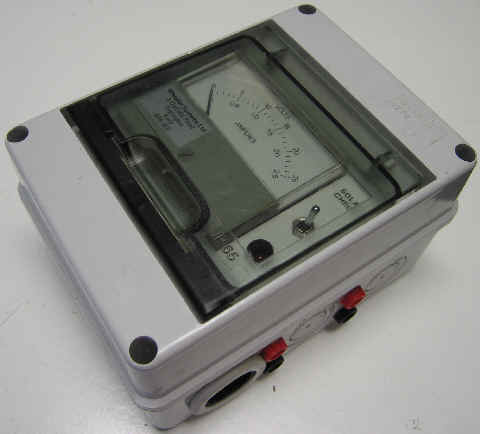 The solar panel input is on the right; the 12V outputs (cigar lighter and 4mm) for ancillary charging on the left: 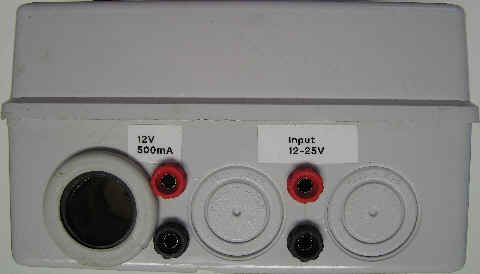 The other side has the connectors for the two batteries: 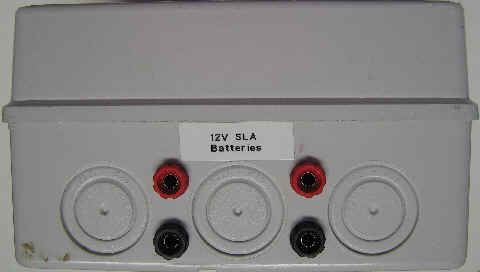 I’ve ended up using 4mm connectors to connect my 12V devices; they are very robust, reliable and fairly waterproof. And if you use stacking connectors on the leads, you can connect multiple devices to a single outlet.

This is the inside of the charger; not the neatest wiring ever, but it does the job. Mounting the cigar lighter socket was a non-trivial exercise!
You can just see the three LT1129 regulators mounted on a bar of aluminium angle on the bottom left: 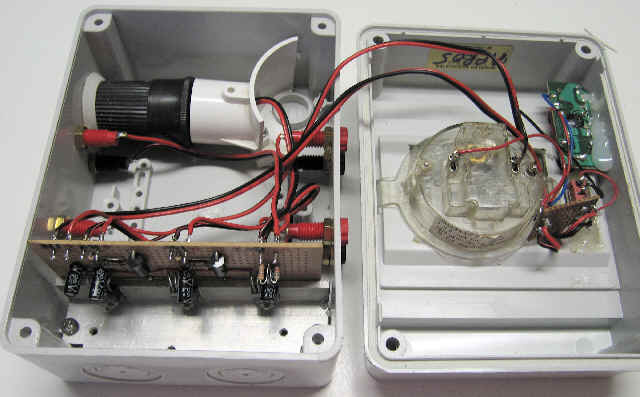